Fashion Houston Five was a four-day experience of some of the most talented designers known. I had the opportunity to attend on Thursday where the collections of Bibhu Mohapatra, Rebecca Minkoff, Rolando Santana, and Houston’s own Jio’zey Reyes and Chloe Dao.

When I pulled up to have my car parked in Valet, my jaw dropped. I was not expecting such a star-studded entrance. It was draped with red carpet from valet to the front door of the Wortham Theater. It was lined with one of my favorite carmakers, Audi. By the way, I have been dreaming about the Audi A8 with black on black wheels. Maybe next year I can roll up in it!

I was so excited about my #OOTN because I had this skirt for at least 3-4 months and had nowhere to wear it to. Well that was until, I created my own little look in my head and thought, “I will shut the red carpet down in this!! Here it is….

What I Wore: Sweatshirt Designed by Me, Skirt by Zelie for She, Shoes by Shoe Dazzle, Black Satchel by Shoe Dazzle, Necklace from Walmart, Makeup by Me, Earrings from Ashley Stewart

Everyone was dressed so chic and fashion forward and the set up could not have been nicer. I saw so many people who I knew in the fashion social circle that I hadn’t seen in so long. That’s one thing about Houston. When there is a major fashion event going on, the fashionistas will definitely come out to play. I even ran into my fashion professor from the fashion program at Houston Community College where I graduated.

And I saw some of my previous fashion classmates who are now full-time designers. Be on the look out for a feature on them.

Everyone was dressed so chic and fashion forward and the set up couldn’t have been nicer. I saw so many people that I knew in the fashion social circle that I hadn’t seen in so long. That’s one thing about Houston. When there is a major fashion event going on, the fashionistas will definitely come out to play

Fashion Houston Five was an amazing show with Spring 2015 pieces shown that will make you max out your credit cards. One of my favorite collections of the night was Bibhu Mohapatra. It was a very tailored collection and he made the almighty classic sheath dress captivating.

By the end of the night, my right foot were literally burning. I bought the Dr. Scholl’s Dream Work High Heel InSole and they were okay up until that end of the night and they did me no good. But at least my shoes were cute while I had to walk slow to my car.

This site uses Akismet to reduce spam. Learn how your comment data is processed. 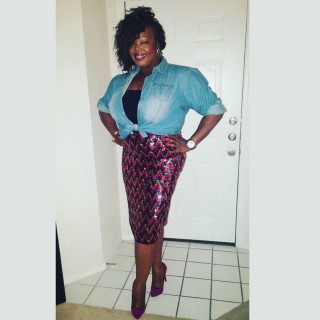 International Fashion Stylist / Blogger who has lived in Asia, London, Paris, Dublin.... I specialize in modern, classic and trendy styling for women and men of all sizes.